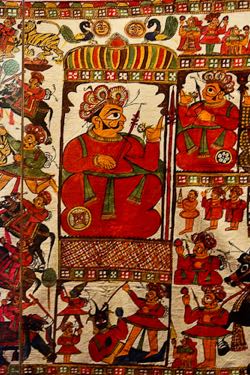 Beautiful and colourful Phad Paintings originated from Rajasthan got its name from rajasthani dialect which means fold and the word phad is derived from Sanskrit word patt. These are long rectangular paintings on cloth which depict the lives and adventures of local heroes using bold colours. These paintings take you through epic stories of dances and songs which are mainly used to create an entertaining evening for villagers. Paintings made on a piece of cloth or canvas known as phad are carried from one village to another by folk balladeers who elaborate the pictorial incidents. These episodic depiction is unrolled only after sunset in relation with all night performance.

The main topic of these paintings are Pabuji and Devnarayanji, Rajasthani heroes who are worshipped and are considered a reincarnation of Lord Vishnu and Laxman. The other topics are the lives of Ramdev Ji, Rama, Krishna, Budhha and Mahaveera. 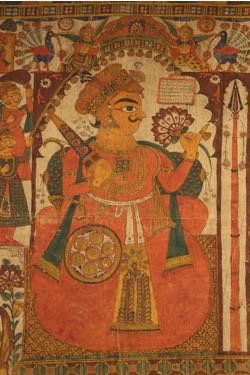 Initially, phad painting was bounded only to the Joshi family. In order to maintain monopoly and secrecy, the art was not revealed to daughters of the family but to daughters-in-law. Over a period of time when the number of artists started to decline, the head of Joshi family decided to open an institute to teach this art in order to save it from vanishing. It is believed there are only 13 phad artists in India.