The word Kalamkari is derived from Kalam meaning pen and kari meaning work, so Kalamkari means work done using a pen. This ancient art of painting which originated about 3000 years ago is hand painted and block printed. This art which was performed using vegetable dyes flourished at ancient cities like Srikalahasti in Tamil Nadu and Masulipatnam in Andhra Pradesh and is passed down from generation to generation. 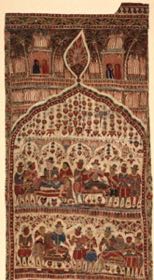 The Masulipatnam form of Kalamkari displays a major Persian influence because of the Muslim rule in Golconda. The commonly used motifs in these paintings are trees, flowers, creepers and leaf designs which were adapted to suit their taste. Whereas, the Srikalahasti is influenced from hindu temples and their main themes are extracts from Mahabharata, Ramayana etc. and hindu deities and heroes like Krishna, Brahma, Lakshmi, Durga, Kiratavinyaarjuna, Rama, Ganesha, Shiva and Parvathi.

Karrupur is another style of Kalamkari painting which was developed in the Thanjavur region during the Maratha rule. This art is carried out on gold brocade worked woven fabric in order to make it more attractive. This was used as sarees and dhotis by the royal family during the rule of Raja Sarfoji and Raja Shivaji. 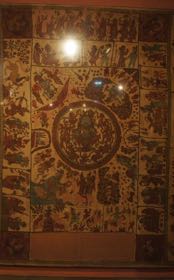 Kalamkari goes through a process called resist-dyeing and hand printing and other processes before it is final. There are chances of colour change depending on the treatment of cloth and quality of the mordant. The dyes used are acquired by taking colours from parts of plants-leaves, roots and mineral salts of iron, copper, alum, tin etc., which are used as mordants. The Kalamkari is done using a brush or pen made by attaching a bamboo or date palm stick pointed at one end with a bundle of fine hair attached to this pointed end.

These beautiful brightly coloured paintings are not gaudy and looks better with every wash as the designs stand out against the background.