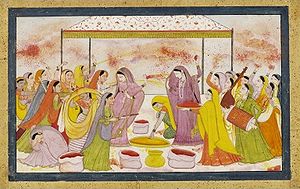 Pahari painting flourished and developed during 17th to 19th century in the hilly areas in northwest like Jammu, Garhwal, Basohli, Chamba, Guler, Kangra and Mandi. These paintings are mostly done in miniature form of painting and influenced by Mughal paintings of Aurangzeb’s period to some extent. Pahari paintings or Rajput paintings are categorized on the basis of geography and family style.

Pahari paintings are also regarded as Rajput paintings as it is an eternal legacy of the Rajasthani style. In the 18th century, many Mughal artists took shelter under the Rajput kingdom. Later, they got the name of new pahari school. Like other Rajput paintings, these paintings were painted on the same parameters like expressing different moods of Radha-Krishna. The themes of these paintings were taken from the texts like Bhagwad-purana, Sursagar, Geet-Govind, Bihari-Satsai, Rasikapriya, Rag-Ragini and Nayika-Bheda. In the pahari school of painting, Kangra style has unique expression of sentiments, diversity of subjects and colour in its painting style. Whereas, Basohli style like Mewar style is dominated by indicative colours and folk art. 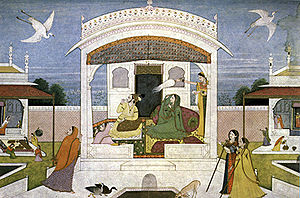 Rajput paintings have a major influence on Pahari paintings owing to the family relations of the Pahari rulers with the royal court of Rajasthan. One thing that makes pahari paintings stand out i the use of shading which gives a sense of depth, which is missing in other types of paintings.

The common themes of pahari paintings are scenes from Lord Krishna’s life combined with beautiful pahari background strattera cost. Other than this, themes were also taken from mythological epics like Ramayana, Mahabharata and many other. The costumes wore by males and females in the painting were adopted from Mughal court however, they were partly similar to what pahari women wore at that time were depicted in the paintings.