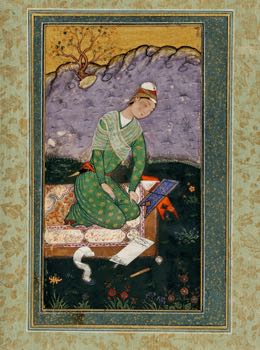 The beautiful Mughal paintings were evolved between 16th-19th century and reflects a great combination of Indian, Islamic and Persian styles. It is believed that these eye luring paintings were originated during the rule of Mughal Emperor, Humayun and this art further prospered under the rule of other Mughal Emperors, Akbar, Shah Jahan and Jahangir. The entry of Mughal art in India is defined as when Emperor Humayun came back from exile he bought two Persian artists with him, gradually their art got influenced by the local styles and it gave rise to Mughal Paintings of India.

Themes like battles, court scenes, love, legendary stories, reception, wildlife, portraits etc became the popular themes of Mughal paintings. These paintings were colourful and rich depicting the scenes inspired from the local and royal life at that time. These paintings had a strong impact of Persian art in it owing to its evolution. The figures and clothes depicted in the paintings makes the observer familiar with the reign of Mughal emperors.

After Humayun, the three most successful emperors of Mughal dynasty, Akbar, Jahangir and Shah Jahan took charge of nurturing this art. These paintings are known to speak the reality of daily life of the imperial court. Mughal emperor, Akbar who had fond love for art and culture was liberal enough to allow the depiction of extracts from Hindu epics Mahabharata and Ramayana to be painted by many Mughal artists. 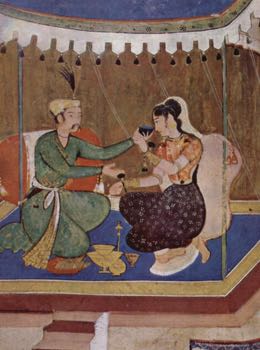 The painters of Akbar depicted instances from Babur’s campaign, his feasts, hunts etc. Akbar being an art lover collected over hundred painters from all over India and Persia many of whom were Hindus from Gwalior, Gujarat and Kashmir. All these artists were headed by Mir-Sayyid Ali and Abd-us-samad who were brought by Humayun Find Out More. After Akbar, Jahangir took charge of keeping the ancestral art form alive and his most talented artists were Abul Hasan and Bishan Das.

Mughal Paintings that have been encouraged from generation to generation are very important as they successfully depict the life of rulers at that time. It shows the political and social condition of the people at that time also, they portray social and courtly customs in these paintings. Some paintings depicts foreign ambassadors which tells Mughals had strong foreign connections. In short, these paintings are clear depiction of the Mughal times and tells great stories.