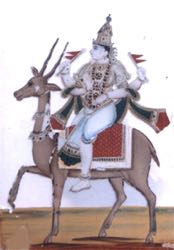 Tanjore paintings are also known as Thanjavur paintings. These one of the popular classical paintings have been Southern Tamil Nadu’s pride for two centuries. Their dense composition and vibrant colours makes them stand out from all other forms of painting. This unique form of painting was originated in 16th century during maratha period.

Tanjore paintings are better known as one of the greatest traditional art form of India and is recognized worldwide. The themes of these paintings are mainly mythological depicting Child Krishna and his pranks, and other various deities. A typical tanjore painting is characterized by a main figure or/and a deity with almond shaped eyes and a round body. The painting is enclosed by arch, curtains etc. However, over the period of time changes have occurred as the figures are not round anymore and the themes have expanded as well, tanjore paintings now depict deities of various famous temples as well. 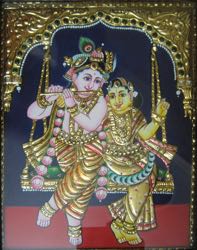 These paintings are made with a unique technique called gilded and gem-set technique in which gold leaves and precious stones are used to highlight various aspects of the painting like dresses, ornaments etc. The use of this technique makes these paintings stand apart from any other form of painting. However, the same technique is also used in Mysore paintings.

Tanjore paintings came in under the reign of the Cholas. Naidus of Madurai, Maratha princes, Nayakas and Rajus communities of Trichi and Tanjore also contributed towards the development of Tanjore paintings from 16th to 18th century.