India is a diverse country where culture, customs and style changes at every kilometre. India has a rich history and many styles of paintings emerged during the rule of different emperors in different era. All styles of paintings are beautiful and intrinsic. The most common theme of all paintings are depiction of gods and goddesses, instances from day to day life and royal life. These paintings were painted on the walls of temples and caves, some of which are still preserved. With advancement in time, the paintings moved from walls to canvas and clothes. Each region has its own different style of painting which reflects the cultural and religious beliefs of that part. All the paintings created during that time were made of natural colours obtained from precious stones and other material. However, with the advancement painting techniques have been changed. Indian paintings have gained popularity not only in Indian but in international market as well. Some of them are adored all over the globe, not only in the form of painting but these arts are used in decorative materials and clothes as well. Let’s have a look at those famous Indian styles of painting which are loved by everyone : 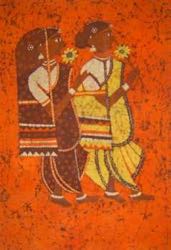 Batik is an art of dying cloth in a way that it brings out beautiful, different and vibrant patterns. Batik is an ancient art which is the speciality of Java, Indonesia. Batik painting is a unique painting method carried out on a piece of cloth. It is done by using the resistant technique. This technique of painting is also used in countries like India, Singapore, Malaysia, Sri Lanka, Philippines and Nigeria but Indonesia remains to be its prime hub. Batik is considered to be a little different form of art as compared to other forms of painting as it gives the artist the full liberty to draw his imagination out on the piece of cloth and turn it into an art piece. 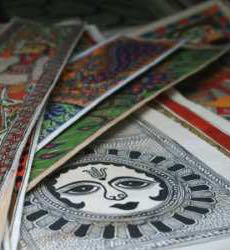 A small village called Maithili situated in Bihar, India gave birth to these intrinsic, colourful Madhubani Paintings. Madhubani is a famous art of painting which is passed from one generation of female to the other. This art made its way from the walls of village homes to the walls of many people’s homes throughout the world. Madhubani paintings are characterized for their is no place left uncovered on the canvas. It is believed that these paintings came into existence at the time of Ramayana. The difference between upper caste and lower caste themes helps in distinguishing Madhubani paintings.

Pattachitra is the old and famous form of art which was born in Odisha but admired worldwide. These colourful and vibrant paintings made on canvas are based on Hindu mythology and mostly inspired by Jagannath of Puri. This ancient painting method is carried out by washing and drying a piece of cloth. Patta painters generally have their family involved in the making of paintings where the work of preparing canvas. 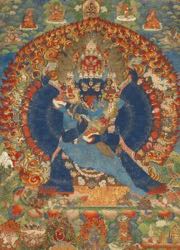 Thangka is a Tibetan painting originated in Nepal depicting Buddhist deity or scene from the visions of great spiritual masters. This two dimensional painting depicts the spirituality reality. The highly geometric thangka paintings are made on silk or cotton. Traditionally, thangka used to depict mantras of deity and sometimes x-rays were passed in order to see pious inscriptions placed under the paint on the front of the image. Being a religious art, thangka paintings are flooded with symbols and allusions which are in accordance with strict guidelines laid out in Buddhist scripture. Thangka paintings serve as an important teaching tool depicting the life of Buddha and various other deities and bodhisattvas. 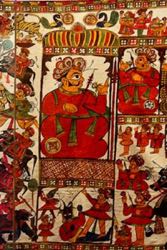 Phad Paintings originated from Rajasthan. These are long rectangular paintings on cloth which depict the lives and adventures of local heroes using bold colours. These paintings take you through epic stories of dances and songs which are mainly used to create an entertaining evening for villagers. The canvas is crowded with figures congruously spread all over the area. Initially, phad painting was bounded only to the Joshi family but now an institute has been established in order to spread this art. 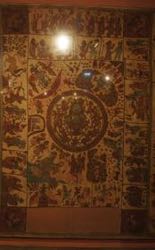 Kalamkari is an ancient hand painted and block printed art which was originated about 300 years ago. Kalamkari goes through a process called resist-dyeing and hand printing and other processes before it is final. This art is carried out on gold brocade worked woven fabric in order to make it more attractive. This was used as sarees and dhotis by the royal family during the rule of Raja Serfoji and Raja Shivaji.