A small village called Maithili situated in Bihar, India gave birth to these intrinsic, colourful Madhubani Paintings. Madhubani is a famous art of painting which is passed from one generation of female to the other. Earlier, the women of this village used to decorate their walls by painting their dreams and hopes. Madhubani form of painting which was confined to this small village came to forefront after 1960’s after the drought hit the area and people had no other choice than to sell their paintings. This marked the growth of Madhubani paintings from plastered walls of village to canvas. 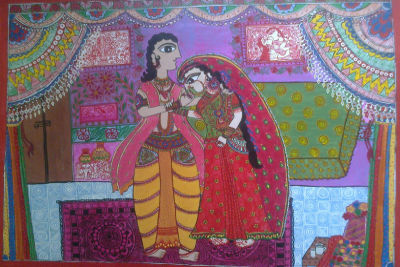 Madhubani paintings are characterized for their is no place left uncovered on the canvas. Images of Hindu deities like Krishna, Rama, Lakshmi, Durga and Saraswati and natural themes like the Sun, the Moon and religious plants being their favourite themes are painted using vibrant colours. Other than this, festivities, social events like weddings, births, life cycle are also depicted in these paintings. These eye luring paintings are made using fingers, twigs, matchsticks and nib-pen so that no place is left uncovered. If any space is left in the main theme, it is covered with motifs, flowers or symbolic geometrical patterns. Natural colours are used to paint these vibrant paintings. They make colours like black by adding soot to cow dung, blue from indigo, red from the kusam flower juice or sandalwood, green from wood apple tree’s leaves and white from rice. No artificial colours are used in making these beautiful paintings.

History says, the Madhubani paintings came into existence at the time of Ramayana when king Janak ordered his kingdom to make paintings on the occasion of his daughter Sita’s marriage. These paintings are characterized with borders or margins which are decorated with geometrical pattern, flowers or other motifs. 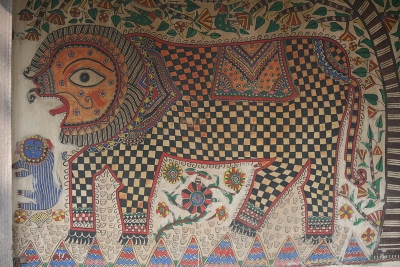 The difference between upper caste and lower caste themes helps in distinguishing Madhubani paintings. The women who belongs to the upper caste are restricted to the theme of religious symbols and gods depicting sophistication in their paintings which is known as the Kanchi and the Bharini style whereas the women of lower caste paints on the theme portraying the aspects of day to day life known as the Godna or Gobar style.

The attractive, vibrant Madhubani paintings began to gain attention and demand in national as well as international market in 1970’s and a number of Madhubani artists received national award for their intrinsic paintings.