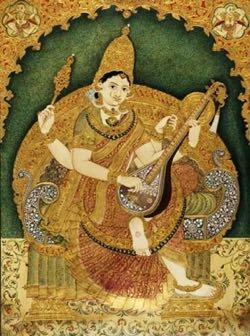 Mysore being the second largest city of Karnataka, India gave birth to the beautiful and unique form of art called Mysore paintings in the 17th and 18th century. It came under the patronage of Wodeyars specially Raja Wodeyar. This art reached its heights and obtained glory under the patronage of Maharaja Krishnaraja Wodeyar III. To surprise, Mysore paintings reached the stage of extinction but somehow, they regained their glory in the later years of 18th century. He is known for the considerable support and encouragement he provided to the artists and the art.

Mysore paintings, much like Tanjore paintings are made using thinner gold leaves. There paintings require a lot of hard work as the work is much detailed. The famous themes of this painting are the Hindu Goddesses and Gods and depiction from Hindu epics such as the Ramayana, the Mahabharata and the Bhagavad Gita.

The most famous depiction in the Mysore paintings was Lord Ganesha sitting on his throne and another famous theme was the depiction of Lord Shrinath who is regarded as an incarnation of Lord Shiva. These paintings are beautiful and a treat to eyes for its spectators. Mysore paintings also depict Goddess Laxmi showering wealth on her devotees, Goddess Saraswati playing Veena, childhood of Lord Krishna and many others which goes on mesmerizing people.

The main centers of Mysore Paintings are Bangalore, Narasipura, Sravanabelagola, Tumkur and Nanjangud. Mysore paintings have made their pace with the modern times. Earlier, Mysore paintings were made on paper, wall, wood or cloth using natural colours painted with brushes made of animal hair but now, they are painted on a canvas using water colours or poster colours. Beautiful Mysore paintings with frail lines, detailed brush strokes and stylish images have now become souvenir during festive occasions in South India.