Thangka paintings are intrinsic paintings known for the use of bright colours, precision and fine themes. Thangka is a Tibetan painting originated in Nepal depicting Buddhist deity or scene from the visions of great spiritual masters. Thangka is a Nepalese form of art which was exported to Tibet after Princess Bhrikuti of Nepal. This two dimensional painting depicts the spirituality reality. 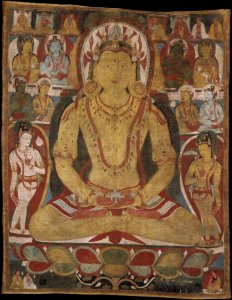 The highly geometric thangka paintings are made on silk or cotton generally with widths from 16-23 inches. They are kept in dry places because of their delicate nature where moisture will not affect the quality of silk useful content. These paintings are made of water-soluble organic or mineral pigments. Traditionally, thangka used to depict mantras of deity and sometimes x-rays were passed in order to see pious inscriptions placed under the paint on the front of the image. The detailed pictures are made in a systematic grid of angles and intersecting lines. These methodical depiction requires deep understanding of the symbols involved. 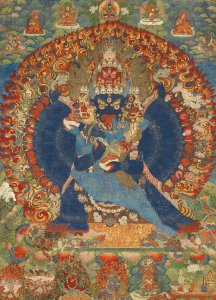 Being a religious art, thangka paintings are flooded with symbols and allusions which are in accordance with strict guidelines laid out in Buddhist scripture. Thangka paintings serve as an important teaching tool depicting the life of Buddha and various other deities and bodhisattvas. The Wheel of Life representing the visual of the Art of Enlightenment is a subject of importance. Most thangkas are relatively small but some are extremely large designed to display especially in monastery walls for a small period of time as part of religious festivals. Thangkas with elaborate composition including small identified figures surrounding the central deity are mostly for personal meditation or instruction of monastic students.